Blanny Avalon Hagenah grew up in the Midwest and inherited a love of horses from her grandparents who raised Arabian horses. She spent many of her teenaged summers riding on their California ranch and helping to keep ranch breeding records for the mares and foals. She enjoyed showing her family-bred Arabian gelding in the youth events and her gelding went on to become National Champion Arabian Stockhorse and Top Ten in several categories.

During high school Blanny worked as a camp counselor at Teton Valley Ranch in Jackson, Wyoming where she learned to pack mules and took campers on horseback pack trips through the amazing Wyoming back country .She helped campers learn horsemanship basics and compete in the camp rodeos. After getting a teaching degree from the University of Arizona Blanny moved to Georgia to teach school where she bought and showed a talented AQHA gelding. The duo moved to Southern Colorado where Blanny became the horsemanship director at Pinon Valley Ranch Camp and the gelding was used for roping and rodeo events. Blanny sold the gelding and moved on to teach school in Port Orchard, Washington for several years, during which she worked on her Masters Degree in Educational Administration and received a Masters in Recreation and Camp Management. After school and on weekends she taught riding lessons at Jim Dones’ successful Appaloosa training stable that showed and promoted owners and their Appaloosas throughout the western United States.

Several years later  Blanny opened her own training stable, “Morning Mist Farm”. She trained youth and non-pros who were competing at both the “A” and “B” circuits (Arabian, AQHA, and Appaloosa) as well as the competitive statewide Washington 4-H horsemanship program. She purchased her first two Appaloosa mares, “Wapitee” a black and white foundation and performance bred mare, and “Allotta Jet”, a halter and performance bred mare. Both mares were multiple champions in the region at the height of popularity with Appaloosa shows having upwards of 25 horses in most classes. After amassing show records, Blanny bred each of the mares to many of the outstanding local Northwest Appaloosa stallions. She purchased several additional broodmares and the resulting foals were gorgeous and talented, sometimes colored, sometimes solid.

After several years Blanny headed back to Arizona and took a number of her best mares and their offspring with her. On her Scottsdale ranch she raised two children whose cousins and friends all showed competitively with Blanny on the Appaloosa circuit. She enlisted Steve Cruse to successfully campaign many of her horses and continued to breed one or two foals per year. Several years in Arizona were followed by a divorce and move of children and Appaloosas to the Central Coast of California. Blanny purchased a ranch property in the rolling hills along the Monterey coast and with the help of Ranch Manager, Richard Welch (now retired), she began her Appaloosa breeding program in earnest. Throughout the years and all of the amazing Appaloosas she raised,  what Blanny wanted in her thoughtfully and carefully bred Appaloosas as much as pedigree, conformation, disposition, talent, and brains was COLOR.

One of the stallions that Blanny chose to cross with her carefully assembled band of well-bred Appaloosa broodmares was Amy and Nick Kinsch’s  talented stallion, “Sunbeach Honkytonk” (Multiple World/National Champion). His performance wins, conformation and ability to produce talented foals brought an extra level of excellence to the resulting foals. Blanny also began introducing Char-o-lot’s Hall of Fame stallion, “The Hunter” into her program and his resulting foals were amazing performance horses. Another outstanding stallion, Undertack (Multiple Reserve/World/National Championships) owned by Lori and Tim Larsen, added additional athletic bloodlines to the foals. Steinbeck Equine Clinic helped keep the broodmares and resulting foals healthy and strong. Blanny then enlisted the aid of winning trainer Christy King to campaign many of these foals adding National, World, and Medallion wins to the ranch trophy case.

Blanny realized that after years of careful breeding her special Appaloosa program deserved to have a name that would become both Nationally and Internationally known for the quality of its Appaloosa horses. Looking to use her middle name, Avalon Appaloosas was born.

AND THEN IT FINALLY HAPPENED !!!!

In March of 2005 an exceptional foal was born at Avalon Appaloosas. Sired by “Sunbeach Honkytonk” and out “Sirtenly Surprised” (daughter of  Sir Wrangler (Hall Of Fame Stallion and Gold Medallion Sire) a stunning black colt with a huge blanket, white-tipped ears, lightening marks on all four legs, and a huge star, “HONKYTONK WRANGLER” (LP/LP)  made his entrance into the Appaloosa world. He was everything that Blanny had been wanting in a breeding stallion – conformation, pedigree, disposition, talent, and the ability to sire 100% colored foals.

“Wrangler” was campaigned as a yearling and two year old by Christy King and was the 2007 Reserve National Champion HIH Stallion. He then came home to Avalon Appaloosas to begin his career in the breeding shed. Many thanks to Christie Gieseke of Moon Valley Stallion Station for standing “Wrangler” and managing Blanny’s broodmares in the early years. The resulting foals were amazing- talented, honest, sweet, athletic and 100% COLORED.

Blanny was fortunate and delighted to add multi-talented Ranch Manager, Tom Swan in 2008, and his lovely wife Crystal in 2009 to the Avalon Appaloosas family. Tom supervises the breeding, foaling, training, ranch operations, and employees with talent and attention to detail. Crystal supervises the ordering of feed and supplies, advertising, photographing, social media, registrations and office management with great organization and a skillful touch. They both grew up in Wyoming and have two adorable daughters who enjoy ranch life. The entire extended Avalon Appaloosas team has welcomed numerous talented employees throughout the years to make sure that our horses are healthy, happy, well-mannered, and a credit to the Avalon Appaloosas outstanding breeding program.

Wrangler’s first foal crops produced “Fearless” (2010 Reserve World Champion HIH Yearling Gelding) and “Promise Mea Wrangler” (2012 Reserve National Champion HIH Yearling Filly). One of his colts “Wranglers Rockstar” was sold to Europe. Wrangler’s offspring were purchased and made their way to homes across the United States. His foals proved to be smart and talented- as well as COLORED- on the trails and in both the English and Western show ring. When breeding seasons were finished Wrangler honed his versatile athletic abilities under saddle at Steve Ross Reining  and Performance Horses and dressage training with Torkkeli and Walker Dressage.

In 2013 Avalon Appaloosas began receiving inquiries from Europe and Australia about breeding to Honkytonk Wrangler. Seeing a market for his foals on other continents in  2015 Wrangler went to the Select Breeders Services affiliate, Pioneer Equine, where he was collected. Wranglers frozen semen was shipped to, and stored by Select Breeders Services in both Australia and Germany. Colorful foals started arriving beyond the United States!

After two decades in California Blanny made the decision in 2017 to move Avalon Appaloosas to an improved facility in Berthoud, Colorado close to the Colorado State University Equine Reproduction Lab for additional assistance with the breeding program. With Dr. Pat McCue’s guidance and with excellent veterinary supervision and care by Dr. J.D. LeClair, the Avalon Appaloosas breeding program and broodmare herd expanded. Not only are there accomplished ApHC, TB, and Warmblood broodmares,  but palomino, grulla, buckskin and Appendix AQHA mares have been introduced.

EVERY SINGLE FOAL IS COLORED.

Honkytonk Wrangler’s  book will be closed to outside mares in the United States at the end of the 2022 breeding season.

Limited semen will still be available in Europe and Australia.

Avalon Appaloosas is excited to present our Junior Stallion!

His breeding career here at Avalon Appaloosas will start in 2023.

This striking 2020 black/white FEWSPOT colt is EE aa LP/LP and will sire BLACK BASED FOALS. 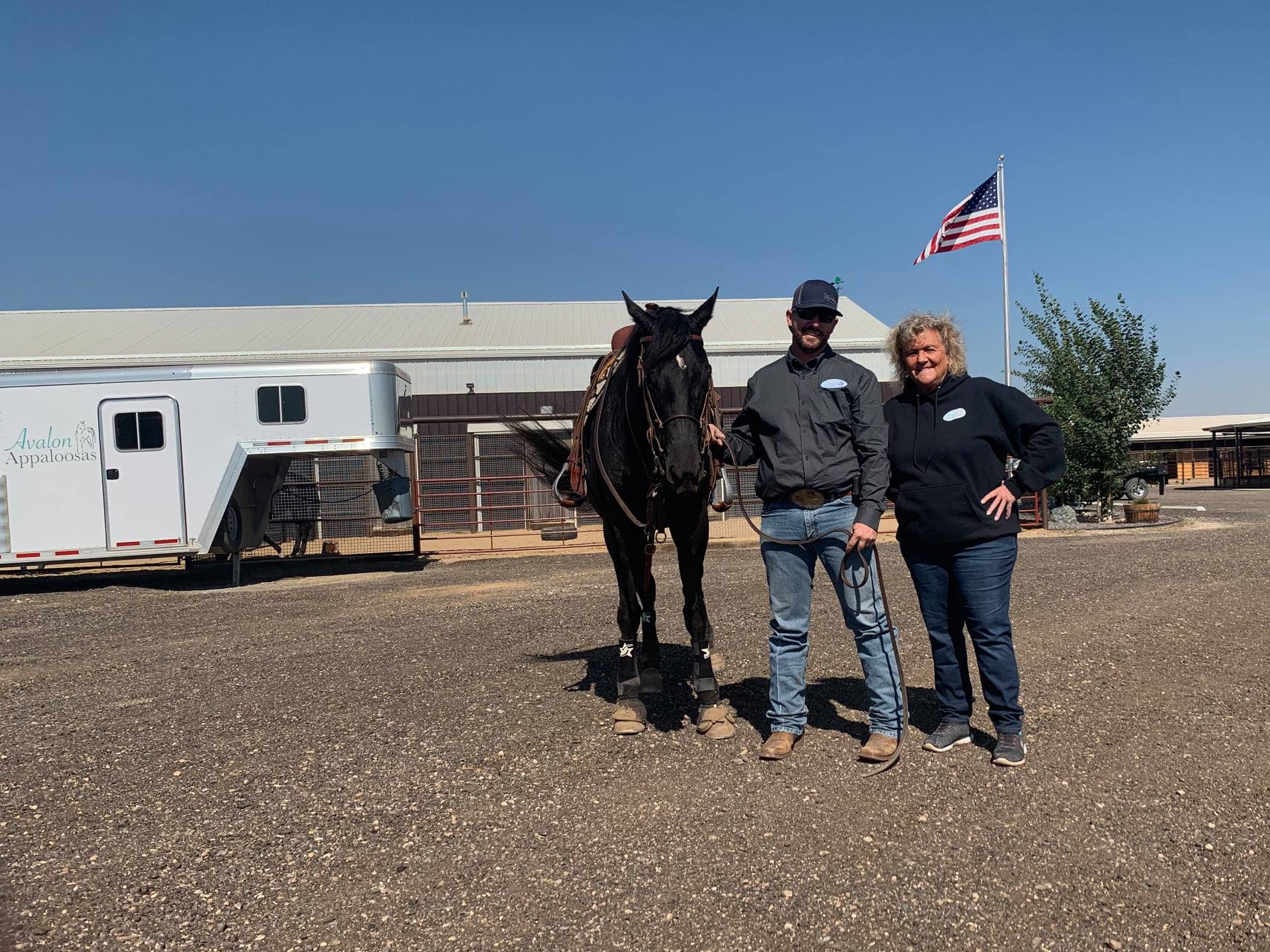 Our emphasis here has always been on producing well-balanced, sensible, athletic, COLORED Appaloosas that go on to show and win in a variety of disciplines.

We are always willing to answer any questions you may have

Available for shipping in the US, Canada, European Union, and Australia

We will be in touch soon!